This piece was co-authored with Sachin Maini, a research fellow at Day One Insights

Our social media news feeds are a constant stream of the unusual.  Upon logging in, you are greeted with the most provocative and extreme events of the day.  What goes viral is what most deviates from expectations. Constant social media consumption barrages us with the unusual, skewing our sense of normality and detaching it from reality.

That distortion will only greaten with the growth of live streaming.  Almost all social media platforms now let users broadcast live from their cell phones directly to an audience of their social media followers. It’s easy to mistake this as a small step in the evolution of video sharing. In truth, it represents a major shift that will change the way we watch history unfold.

There are three major illusions which will greatly hasten and intensify this distortion.  First, live streams are often in the first person - making you feel like you’re there yourself.  Second, live streaming broadcasts have an immediacy unparalleled by any other media format. And third, live streaming creates the illusion that you’re passively observing events while you’re really interacting with them.

Because first-person is more emotional in nature, it’s also more convincing - and that’s where the problem arises.  We tend to value the first-person perspective on a gut level.  While witnessing an event first hand may seem like the best way to learn about it, relying on first person accounts may be a flawed method for objective analysis.

First-person is inherently subjective.  The same event seen from different perspectives can lead to completely different reports, as when witnesses in court have different testimony after being present at the same crime. So while more and more events will be caught on tape with the spread of live streaming, not all footage of the same event will paint the same picture.  The public will come to different conclusions, but everyone will be united in the visceral conviction that they know what really happened.

When watching traditional video of a situation, you know that what you’re watching has already taken place. Even if you don’t know the outcome, you know it’s in the past. Somebody out there does know what happened. But with live streams, there’s uncertainty. Anything can happen - no one in the world knows. This matters a lot on a psychological level. It’s why people value live concerts, or watching sports games live, a feeling of uncertainty helps simulate reality - it makes what you’re watching feel more real.

What Gordon Magnum calls “disintermediation” adds to the personal immediacy of live streaming since it “cuts out the middleman that is mainstream media coverage”. There’s no intermediary between you, a live stream viewer, and the events being broadcast. You share broadcasters’ point of view and form a personal connection with them, something impossible to do with an impartial professional cameraman.

But that connection goes two ways. Not only are you directly viewing things from the perspective of the broadcaster - who is often a participant in the event being broadcast - but you’re also sharing your perspective with them as they broadcast, potentially influencing events on camera as a viewer. This is something totally novel and unique to live streaming, something that sets it apart from, say, watching a YouTube video - where viewers interact with the video uploader through comments, views and “likes” only after the fact.

Viewers not only observe what’s going on, they participate and help to shape the behavior of the broadcaster with their commentary. This could have awful consequences if the audience of a broadcast is hungry for shocking or extreme footage, who might egg on the broadcaster to do something terrible. Already this year there have been multiple cases of people live streaming their suicides, forcing Facebook Live to release new suicide prevention tools.

The challenges posed by this aspect of live streaming have no easy solution. Platforms like Facebook have pushed out their Live streaming products without thinking things through in a rush to be ahead of the curve. Social etiquette for the new technology has lagged behind as a consequence. Social questions like “when is it okay to live stream, and when not?” and legal questions like “when is a viewer legally liable for influencing a livestream broadcaster to commit a crime?” have barely been broached.

This becomes an especially troubling question when it comes to the new business models that live streaming makes possible - paying people to do things on camera. On one hand, this could open up new vistas for monetizing an audience - for example, a musician might use a pay-per-viewer live concert broadcast to monetize their social media following. On the other, it could incentivize obscene, shocking, and even criminal activity on camera.

Live streaming is replacing what’s real with what’s recorded by allowing us to view the world as it happens through the eyes of each person present.  It remains to be seen whether the darker side of live streaming will outweigh its benefits, but that’s not really the point.  With each new media technology we have to examine how it influences our understanding of the world.  We must analyze the nature of the shift that has occurred, and examine the contradictions that lie within the medium. 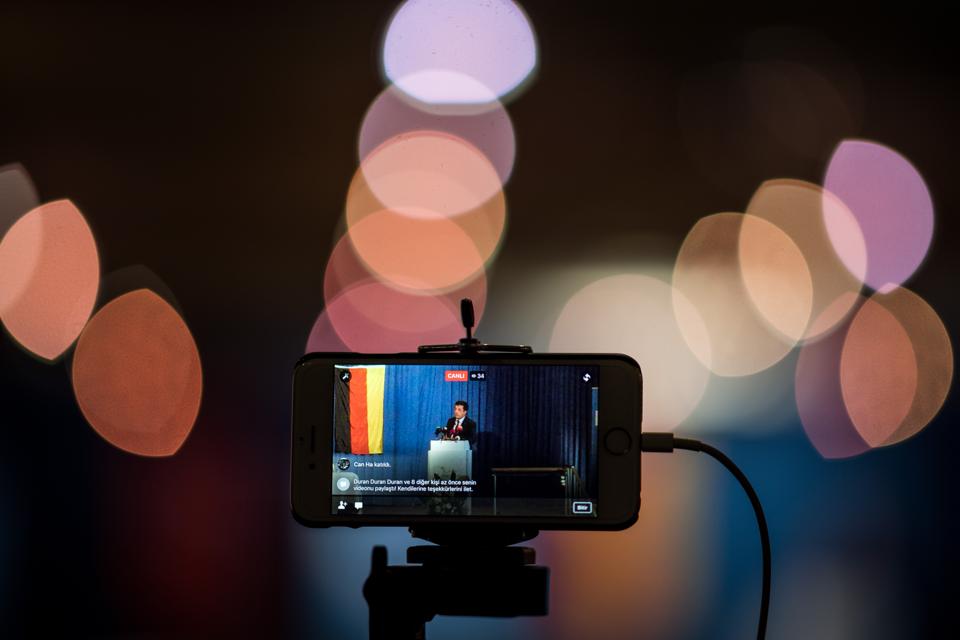 Its compelling nature is what makes live streaming worth watching, and could be valuable in raising awareness around stories and increasing civic engagement. It could also open up a whole new range of business opportunities. But there are costs as well. Especially as society struggles to catch up to the new technology with behavioral norms governing its use. (Photo by Lukas Schulze/Getty Images)